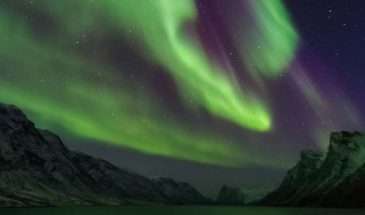 The Northwest Passage is one of the world’s greatest voyages. Our fleet of Zodiacs guarantees excitement with every excursion.

Every day is a new adventure when sailing the Northwest Passage; hiking, photography, birding. Exploring archaeology and spotting bears. Visiting villages perched on mighty mountains. Learning with our experts. Meeting the people who call the Arctic home. And sailing the passage at the top of the world!

Located at the mouth of the Coppermine River, Kugluktuk is the western most community in Nunavut. Known for many years as Coppermine, the community reverted to its original Inuinnaqtun name—meaning “place of moving waters”—on January 1st, 1996.

The Coppermine River is designated a Canadian Heritage River for the important role it played as an exploration and fur trade route. Our charter flight will land in Kugluktuk and we will embark the Ocean Endeavour by Zodiac to commence our trip!

The Kitikmeot Region consists of parts of Victoria Island, the adjacent part of the mainland as far as the Boothia Peninsula, King William Island, and the southern portion of Prince of Wales Island. Its regional seat is Iqaluktuuttiaq (Cambridge Bay), though it also contains five other hamlets (including Uqsuqtuuq and Kugluktuk). Recently, the Kitikmeot Region has been in the news since the finding of the lost ships of the Franklin Expedition in its waters. It is Nunavut’s least-populated region, though wildlife abounds here both in the sea and on land.

The ‘obvious’ route through the Northwest Passage, Parry Channel seldom provides a full transit because of ice. It is named after Arctic explorer William Edward Parry, who got as far as Melville Island in 1819 before being blocked by ice at McClure Strait.

Peel Sound was the Franklin expedition’s route south. It presents numerous wildlife and expedition opportunities. The setting is optimal for hiking and exploring the geological diversity of the area.

In 1845, Sir John Franklin set out from England with HMS Erebus and Terror, attempting to sail through the Northwest Passage. Franklin’s party overwintered at Beechey Island where three of his men died.

Numerous search parties later used Beechey as a depot and rendezvous. Amundsen, Bernier, and Larsen visited Beechey. Thomas Morgan of HMS Investigator was buried there in 1854 alongside Franklin’s men. The graves and the ruins of Northumberland House are a haunting memorial.

We will spend the day exploring the ocean wilderness of Tallurutiup Imanga (Lancaster Sound). In August of 2017, this enormous body of water was declared a National Marine Conservation Area.

Large populations of marine mammals, including narwhal, beluga and bowhead whales transit and feed in this area. There is a great selection of landing sites available, depending on weather, wildlife, and sea conditions.

Aujuittuq means ‘place that never thaws.’ 1,150 kilometres above the Arctic Circle, Canada’s northernmost “civilian” community originated in the Cold War; in 1953, residents were relocated to Aujuittuq to boost Canadian sovereignty. In 2016, the census placed the population at 129.

Our activities will centre in the village where we will have a chance to meet members of the community, learn about their way of life, and hear their poignant stories.

Smith Sound served as the main route for explorers and adventurers searching for the North Pole. Adolphus Greely, Sir George Nares and Elisha Kent Kane all travelled these waters with varying degrees of success.

We will explore the stunning fjords that line the coast. Glaciers and icebergs abound here. In true expedition style, we will seek opportunities to hike, explore, and view wildlife as conditions allow.

Ilulissat translates literally into “iceberg”, an apt name for this site at the mouth of the Ilulissat Icefjord—a UNESCO World Heritage Site. The icefjord is the outlet of the Sermeq Kujalleq Glacier, source of many of the icebergs in the North Atlantic.

Here, we will cruise in our fleet of Zodiacs to appreciate the icebergs. And we’ll visit the bustling town of Ilulissat, with its museums, cafes, craft shops, and busy fishing harbour.

The west Greenland coastline is a rich mixture of fishing communities, many islands and complex coastal waterways. The waters are relatively warm here, due to the West Greenland current and the more southerly location. This makes for lusher vegetation.

As we enter the Arctic autumn, the tundra foliage will be in gorgeous colour. We will be making an expedition stop here to explore the landscape of wild Greenland.

Sondre Stromfjord is one of the longest fjords in the world and boasts 168 kilometres of superb scenery. We end our adventure by sailing up this dramatic fjord as the sun rises to greet us.

Kangerlussuaq, the town at its eastern head, is a former US Air Force base and Greenland’s primary flight hub. Here we will disembark the Ocean Endeavour and transfer to the airport for our return charter flight. 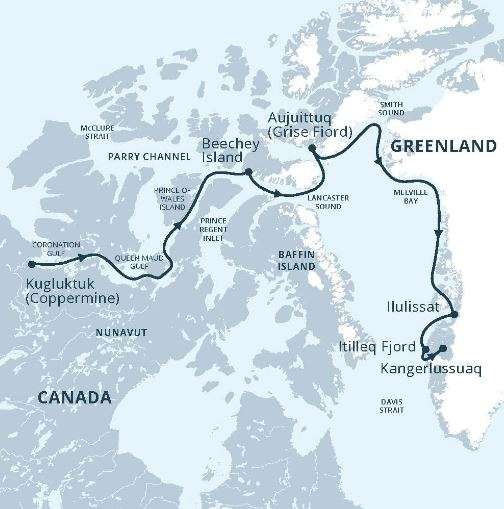 Prices are current at time of publication (Oct 7, 2019). While unexpected, pricing and itinerary are subject to change.

Save 30% under 30 – Save 30% on berth cost for travellers under thirty years of age. This special can be combined with the Free Single Supplement promotion.