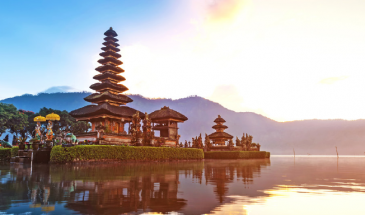 With over 17,000 islands the Indonesian archipelago is the largest in the world. Combine pure sailing passion with Starclippers comfort in a country full of diverse landscapes and culture.

Take an adventorous and exciting sailing around the Indonesian islands. With over 17,000 islands the Indonesian archipelago is the largest in the world. Combine pure sailing passion with Starclippers comfort in a country full of diverse landscapes and culture. Sailing around the islands of this intriguing country reveals white sandy beaches, volcanoes (both active and extinct), dense rainforests full of luscious vegetation and colourful wildlife and beautiful coral reefs  teeming with marine life. The remoteness of some islands means you’re unlikely to meet people from other cruise ships.

Benoa is the main cruise port on the island of Bali. There are numerous places that can be accessed from here including the party-centric Kuta, Nusa Dua the popular beach resort with it’s luxury hotels and restaurants as well as coffee plantations and rice terraces. Trips to temples, palaces markets and a bat cave are some of the many things also on offer.

Gili Kondo is an uninhabited island which is part of thirty three small islands in Eastern Lombok. The word Gili simply means “small island” in the Sasak language. Enjoy snorkelling directly from the beach, the waters are very calm and there are plenty of multi-coloured fish. Afterwards you can relax on the white sand and soak up some rays, or take a long beachcombing stroll.

The park was founded in 1980 with the aim of preserving the unique Komodo dragon and its habitat. Komodo Island is the bleak and desolate domain of this highly aggressive reptile that looks like a relic from the age when dinosaurs walked the earth. The species is notoriously fierce and the “dragon” moniker is well deserved. The Komodo dragon which belongs to a once widespread order of monitor lizards now survives only on a handful of islands. This giant lizard can grow up to 3 metres in length and weigh as much as 150 kg. Like other monitor lizards they have tapered heads, visible ear-openings, a long slender neck, round pupils and eyelids and above all very powerful jaws.

Pink beach, or Pantai Merah, is one of only seven such beaches on the whole planet. The amazing colour comes from microscopic animals called Foraminifera which leave a red pigment on the coral reefs and the name Pantai Merah literally means red beach. Pink beach is bounded by turquoise blue sea and offers spectacular views of the surrounding area, including small islands, hills and mountains. It is said to be the best spot for snorkelling in Komodo National Park.

Satonda is a tiny uninhabited island formed millions of years ago by an eruption which rocked the sea bed at 1000m and projected volcanic rock upwards to a height of 289 metres above sea level. The local people believe that the island is sacred and you can see offerings in the form of bits of coral hanging in the trees; these have been put there by pilgrims who visit the island in the hope of having their wishes granted. Satonda is surrounded by beautiful coral reefs with a large variety of tropical fish; to protect this unique underwater paradise the island was declared to be a Marine Nature Park in 1999.

Gili Trawangan, universally known as “Gili T”, is the most cosmopolitan and popular island. During the day you can explore the island on food, snorkel, sunbathe, join a dive trip, rent a bike or take a horse carriage ride. These activities are offered by local companies directly at the disembarkation pontoon.

Gili Naggu is on the southwest coast of Lombok and is still relatively undeveloped, offering a pristine natural region for travelers to explore. The only noise that breaks the serene silence is the singing and twittering of the birds. The beaches are powder white sand and the water crystal clear and teaming with thousands of tropical fish making it an ideal destination for snorkeling If you’re lucky you may even spot some sea turtles.

Benoa is the main cruise port on the island of Bali. There are numerous places that can be accessed from here including the party-centric Kuta, Nusa Dua the popular beach resort with it’s luxury hotels and restaurants as well as coffee plantations and rice terraces. Trips to temples, palaces markets and a bat cave are some of the many things also on offer.

To the south of Madura lies a small island, Giligenteng, a community of four peaceful little fishing villages, where everybody knows each other. The village of Bringsang consists of one small street, a mosque and a few local shops. There are no tourist attractions but it is an authentic fishing village and will give you an insight into the everyday life of this little community. The atmosphere is one of quiet content and the people are remarkably hospitable and friendly, saying hello and waving greetings as they go about their business. The beach here is really beautiful with clear water and pristine white sand.

Probolinggo is a port town whose main activity is fishing. It is also the nearest town of any size to the Bromo-Tengger-Semeru National Park on the east coast of Java, and a stopping point on the way to the Gunung Bromo volcano. The area in and around the park is inhabited by the Tenggerese, an ethnic minority, and one of the few remaining Hindu communities on the island of Java.

North of Bali, the Lovina tourist area stretches over 12 km and consists of a string of coastal villages: Kaliasem, Kalibukbuk, Anturan, Tukad Mungga, collectively know as Lovina. Lovina’s black sandy beaches are quite lovely, the sea is very calm here and safe for swimming. The atmosphere on the beach is one of laid-back tranquillity with colourfully decorated traditional outriggers called perahu dotted along the shoreline.

Sengiggi is Lombok’s traditional tourist resort. A large bay forms the centre of the resort and it is one of the busier places on the island of Lombok. The main street comes alive at night and there are many restaurants to dine in as well as plenty of bars for live music and nightclubs to dance in. However one of the most amazing sights on the island can be viewed from Sengiggi Beach, the spectacular sunset. The bright orange sun sinks into the ocean with Bali’s Mt. Agung volcano silhouetted on the horizon.

This is the perfect island getaway, a small “resort” with fine white sand, coral reefs and limpid turquoise waters teeming with marine life including colourful tropical fish and starfish. The island has facilities and there is shade. From here the ship’s zodiac can take you to “Gili Kadiz”, a great snorkelling site. 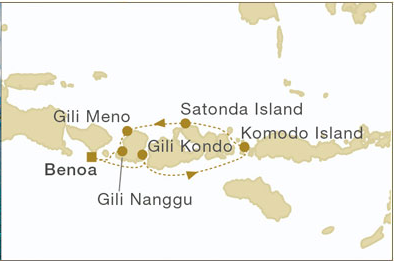 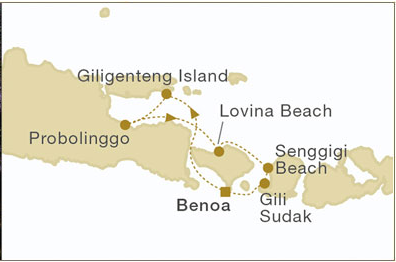 Starting from CA$1,770. Please contact us for details on pricing based on cabin category and departure dates.