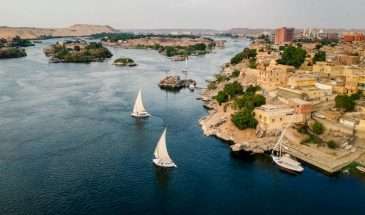 Chartering a private yacht is the perfect way to discover the incredible ruins of Ancient Egypt. Cruise along the Nile between Luxor and Aswan on board this boutique yacht and explore timeless monuments along the way.

Enjoy beautiful Nile Valley scenery as you cruise down the River Nile on a 5-day cruise from Luxor to Aswan. The itinerary aboard the Sanctuary Zein Nile Chateau operates on an “a la carte” menu, offering you the unique opportunity to tailor your sightseeing. Bask in the beauty of the surrounding views – unchanged for hundreds of years – as you sip on delicate cocktails from the comfort of the dahabiya. This is what sailing on the Nile was meant to be.

Questions? Please contact one of the Civilized Adventures' Adventure Travel Specialists at info@civilizedadv.com

Check-in on board the Sanctuary Zein Nile Chateau followed by lunch on board. Afternoon visit to the East Bank. Visit the Temple of Karnak, built over more than a thousand years by generations of Pharaohs & the Temple of Luxor dedicated to the god Amun. Afternoon tea and dinner on board. Overnight in Luxor.

Breakfast on board. Morning explore the Valley of the Kings, a vast City of the Dead where magnificent tombs were carved into the desert rocks, decorated richly, and filled with treasures for the afterlife by generations of Pharaohs.
Visit the West Bank, with a choice of three from the below:
1 – Valley of the Queens, it is called “Place of Beauty” by the Egyptians, where the pharaohs’ wives and children were buried.
2 – The Temple of Queen Hatshepsut (Ancient Egypt’s only female Pharaoh).
3 – The remains of the self-contained village on the West Bank where the workmen who built the kings’ and queens’ tombs lived in mud brick houses with their families.
4 – On the West Bank sit 400 tombs of Theban aristocrats, some of which you can enter. The tomb walls were white-washed and painted with murals of the nobles’ daily lives, making them quite different from royal tombs, where relief work focused on judgment and resurrection.
5- The magnificent Medinet Habu is a series of temples built by the Pharaoh Ramses III (1182-1151 BC) and second only to Karnak Temple in size and complexity.
6 – The Ramesseum, the Mortuary Temple of Ramses II, was built early in the great pharaoh’s reign and was 20 years in the making.

Lunch, afternoon tea and dinner on board. Sail to Esna. Overnight in Esna.

Breakfast on board as we sail to Edfu. Lunch on board. Afternoon visit to Edfu temple. Explore the largest and most completely preserved Pharaonic – albeit Greek-built – temple in Egypt, the extraordinary Temple of Horus at Edfu. Afternoon tea on board as you sail to Kom Ombo. Dinner on board. Overnight in Kom Ombo.

Breakfast on board. Early Morning visit to Kom Ombo Temple. In this Ptolemaic temple shared by two gods, Sobek and Horus the Elder, everything is duplicated symmetrically, with double hallways, doors and chambers. Lunch while sailing to Aswan. In the afternoon choose any two visits from the below choices:
1 – Philae Temple – According to the Ancient Egyptians, the goddess Isis traveled all over Egypt gathering her husband Osiris’s remains after he was cut to pieces by his evil brother. On Philae Island, where she found his heart, the Egyptians built a sacred temple to Isis, goddess of purity, sexuality, nature and protection. During the building of the High Dam, Philae Island was submerged by water, so UNESCO helped transport the temple complex to nearby Agilika Island, where you see it today.
2 – Visit this massive obelisk, which was abandoned in Aswan’s Northern Quarry when a crack was found as it was being carved from the red granite. Tools left behind show how builders accomplished such great work.
3- The Temple of Kalabsha (also Temple of Mandulis) is an Ancient Egyptian temple that was originally located at Bab al-Kalabsha (Gate of Kalabsha), approximately 50 kilometers south of Aswan. The temple was situated on the west bank of the Nile River, in Nubia and was originally built around 30 BC during the early Roman era.

Afternoon tea and dinner on board. Overnight in Aswan.

Breakfast on board followed by check-out.

The itinerary is a bespoke one and offers you the unique opportunity to tailor your sightseeing tours by offering you an “À La Carte” menu. Simply make your selection from the sites offered within this itinerary.

Civilized Adventures curates each charter itinerary on an individual basis. Please contact us to customize your yacht adventure and to know more about our options for extensions in Egypt.

The Sanctuary Zein Nile Chateau features six beautifully designed cabins. The two suites and four signature cabins have all been created with guests’ comfort in mind for the ultimate luxury Nile cruise. Each of the cabins is decorated in its own original style with influences drawing from Egypt’s history, culture and geography.

All cabins feature a Nile view, are fully air-conditioned with individual controls, and have LCD televisions with satellite connection and private bathrooms with shower and hairdryer.

There is an upper deck, a luxurious Arabian themed sun deck with dipping pool (heated to 28 degrees during winter), dining area and lounge.

The best time to visit Egypt is from October through to April, as the weather is cooler.

Cost to charter your private yacht

Enjoy an all-inclusive experience including the service of a crew, all your meals with water, coffee & tea, and all sightseeing with a private guide.

Sound Interesting? Call us, we have lots of fabulous options to create your DREAM vacation!!

Scheduled departures are also available if you prefer to share a small group experience. Please contact us for more details.